There are a number of different cutting techniques for flat goods that can be computer controlled. CNC stands for "Computer Numeric Control" and basically means that the cutting head is moved in space along X and Y (or more) axes according to precisely specified coordinates. For example, the cutting head may move from 0,0 to 0,10 to 10,10 to 10,0 and back to 0,0 again, tracing a square of size 10.

The most common CNC machines for cutting flat goods are the CNC router, the laser cutter, and the waterjet. Each of these machines has a different set of strengths and weaknesses. There is considerable overlap in their abilities, and it may not be obvious at first which is best for any particular material and cut pattern.

Let's take a brief look at each and compare their abilities. 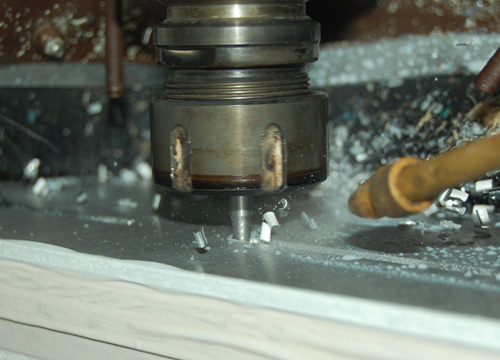 A router cuts by spinning a tubular cutting bit at very high speed and moving the whole assembly sideways. It is a little like a drill bit, but router bits are designed to cut crosswise on their sides instead of just on the tips like a drill bit. In fact, some router bits cannot cut directly down, although this is not common. The width of its kerf — the part of the material cut away into sawdust — depends on what bit is used. If a quarter inch bit is used, and no compensation, then our example 10" square will actually be a 9-3/4" square. To achieve the desired size, the computer in reality will trace a square that is offset by half the diameter of the bit.

There are a vast variety of router bit sizes and shapes giving the router a huge range of cutting ability. Routers can cut almost any material that is sufficiently stiff that it won't wrap itself around the bit. The routed edge is very clean and precise - and exactly 90° from the material top and bottom, unless a shaped bit is used. A router, properly programmed and configured, can cut to tolerances of a thousandth of an inch.

Another strength of the router is that it does not have to cut all the way through the material. This allows for "pocket" cuts, dadoes and rabbets, engraving, and other essays into the third dimension.

The main downside of the router is that it cannot cut very sharp inside corners due to the width of the cutting bit. The corner can only be as pointy as the radius of the bit used to cut it, which depends on the material type, thickness, and speed of cut. On materials of a hardness approaching the hardness of the bit, a router may need to make several passes of increasing depth to cut fully through the material to avoid breaking the bit. Yes, a router can cut metal - the picture above is of our router cutting through 1/4" aluminum. Cutting steel, however, requires lubrication, and not all machines have that capability.

A laser does not technically cut the material. It burns or vaporizes a very thin kerf, separating the parts on either side. This has two significant consequences. First, some materials are not suitable for laser cutting as they release poisonous gas when heated. One common example of this is PVC (polyvinyl chloride, a commonly used plastic in signmaking), which releases chloride gas when burnt or melted. For the safety of the operator and anyone else in the vicinity, PVC as well as certain other less common plastics should not be cut on a laser.

Secondly, many materials will show some char at the edge of the cut. This is most obvious with wood-based and other natural materials: plywood, cardboard, leather, fabrics. For some uses this doesn't matter, but in many cases a visible and odorous char that will mark objects it touches is not acceptable. Other materials such as acrylic or polyester will have a visibly melted edge. The more powerful the laser, the less noticeable the char or melt - the high power means the laser can move faster and heat up less of the material along the cut line.

Laser cutting in fact has notable distinctions in ability between low power (60-80W) and high power (5000W). Depending on the power and various other features, a laser-cutting machine may or may not be able to cut metal, or materials thicker than a quarter of an inch or so.

Because a laser is a focused beam of light, the vertical edge of a laser cut piece is very slightly angled as the beam broadens out from the focal point. For thin materials this may not be visible, and in many cases does not matter much. The laser kerf varies based on many factors but is usually between a tenth and a third of a millimeter. Depending on the software used to prepare the cut pattern, this may or may not be taken into account, so that a square drawn at 10" may actually end up closer to 9.975" on a side.

A significant strength of the laser cutter is that nothing physically touches the work material. This means a laser can cut very thin, soft, or flexible materials (as long as they are otherwise suitable) that would shift if touched by a cutter or grinder, such as fabrics or rubber. 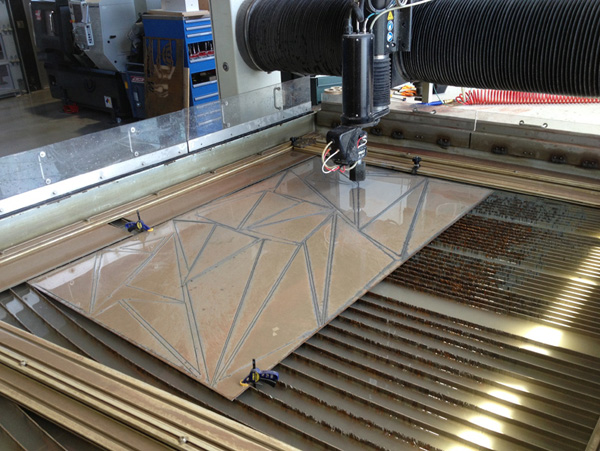 The waterjet machine uses a tiny and extremely high pressure jet of water, usually containing a fine sharp grit, to grind through material. The sheet to be cut rests on slats over a pool of water into which it is usually sunk during cutting for protection of the operator and anyone else in the area. A waterjet nozzle generally moves more slowly than a laser or router for the same type of material, if comparison is possible.

A major strength of the waterjet is that, because it grinds rather than slicing, it can be used for glass, ceramic, and stone, as well as all kinds of metals. It can cut very thick materials simply by slowing down the speed of the nozzle. It is not suitable for cutting flexible materials or any material that shouldn't get wet.

A waterjet's kerf is larger than that of a laser and is generally compensated for by the control software. The kerf does widen over time as the grit wears away the inside of the nozzle tip, and when the hole gets too big the tip must be changed.

The waterjetted edge is somewhat rough, with vertical striations from the grit. As with the laser, the waterjet creates a slightly angled edge, though for different reasons. The cut proceeds angled slightly back from the direction of the nozzle, somewhat like a rope drawn slowly through water. On tight curves this effect increases the kerf over what it was on a straight line. A secondary process of grinding and polishing can be used if the edge must be good looking or smooth.

Another often used CNC machine is the plasma cutter. Plasma cutting uses a superheated jet of air and charged ions to melt and blow away a relatively large kerf size. The heat is created by an electric current (somewhat similarly to arc welding) restricting its use to conductive materials - it can only cut metal. It is quite fast but tends to warp thinner metal sheets.

It is also worth mentioning the vinyl cutter. This device cuts thin sheets of vinyl using a very sharp knife based on drawings you give it, making it a CNC cutting machine as well. It is not a general purpose machine though. Material is sold rolled on tubes specifically to be sent through a cutter of this sort, and it would take some work and hacking to get it to cut anything else.